When The Book Is Written, I'm Not Optimistic About What Its Going To Say

An Article Comparing right now to Obama's H1N1 Response
The right is a prisoner of the moment, not recognizing we are very early on this and were flying blind at the critical juncture.  I think that failure at the beginning means a lot of pain down the road.  I think it will be a case of acting too late and being unprepared at all levels.  We were too complacent.   I think this is going to get bad bad in terms of the number of people that get critically ill and die. Hope I am wrong.
Posted by Basspastor at 2:30 PM No comments:

Random Thought Tonight on People Being Killed By The Police

The OGRE Is Learning Some Humility

In case you didn't know what OGRE stands for, this is from my original blog post at this blog:
And for those that do not know an OGRE is an Opinionated Genius Right Everytime. An OGRE will use the Right hand of reason along with the Left fist of "bullshitastical dumbassery" to beat and eat Trolls and devour or maim anyone else that dares to cross their path.

I am now changing the meaning of the word to Opinionated Guy Right Every-so-often.  I guess the stroke, all the stuff I read online thanks to social media, and changes in my philosophic/theological outlook has taught me some humility.  There is a lot of "bullshitastical dumbassery" in the world.  I'll try to do less of that and listen to what people are actually saying, or trying to say, and actually respond to it in a meaningful way.  Our public discourse has become far too divisive and I think adding to the BSDA is a dead end road.  Being right doesn't matter as much as getting it right or at least heading in that direction.
Posted by Basspastor at 3:37 AM 1 comment:

The Evil I Speak Out Against 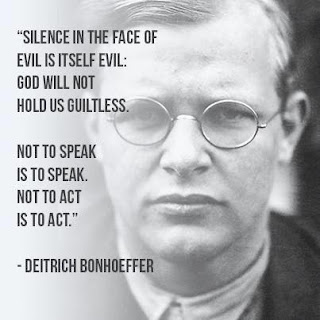 This was shared by a Christian Clergy Women that I think is a confused about the nature of the evil we are facing at this present time. Very real enemy's exist to Liberal Western Civilization that IS NOT us. Enemies that are every bit as totalitarian, brutal and evil as the Nazi's, Communists, and Imperial Japanese at their worst. Enemies that are driven by a confidence in the righteousness and inevitability of their dreams of worldwide domination. Extremists of such a sort should never be underestimated especially when they readily announce their intentions to bring destruction to our way of life.

Not that our way of life is perfect, it most certainly is not.  We are human's.  We are flawed.  We make mistakes.  We sin against heaven.  We sin against our fellow man.  But for all of our faults at least we are not totalitarians. God help us all if these enemies of which I speak do prevail.  Not that I think they will.  But right now they have far to much oxygen to breathe.  They will use this oxygen to make the world a more messed up place.  They will continue to have it as long as Obama is in office and his leading from behind policies are in place.
Posted by Basspastor at 4:20 AM No comments:

George Bush never stated it, but very much used a fly paper strategy by going to war in Iraq.  For some reason Obama never thought that agitating Jihadist's and goading them to battle our soldiers in their lands was a good strategy.  Even though our never stated strategy was clearly starting to bear fruit Obama put an end to it in Iraq.  Obviously (or obliviously) Obama knew What? was best.

What? was so smart about handing Iraq over to Iran to deal with?  How was that in our or any of our allies best interests?

Well as it turns out Obama's strategy is looking as foolish as he thought Bush was for invading Iraq.

So now we have an emboldened Iran and a resurgent Sunni jihadists. And now we have a very limited number of troops back in Iraq and presumably in Syria as well.   But those troops are not seen as occupiers in the eyes of the Jihadist's and those they are recruiting. (rolling eyes and smh)

So now we find out from the no less than the NY Times we must be careful not to fulfill some crazy Jihadist prophecy/fantasy.  C'mon President Obama don't tell me you believe in some crazy Jihadist superstition.  You want to do something about stemming Jihadist recruiting then go right after there crazy superstitions.  They want a battle in Dabiq, lets blow the place up and then send in the Marines along with your much vaunted international coalition.

Put aside your pride Obama, Bush was right, battle them over there and the problem won't be as bad over here.
Posted by Basspastor at 11:11 PM No comments:

What? Overreaction Did The French Have To 9/11?

Tonight on my local 10 'o clock news there was a "Terrorism Expert" who said we should not overreact to tonight's terror attack in Paris, the way we overreacted to 9/11.  He claimed that is exactly what the terrorists want us to do and it would be a mistake.  Because if we overreact, the way we did after 9/11 we will only make matters worse by alienating more Muslims and creating more terrorists.

But wait a second Mr. Expert, France wanted and played no part in Operation Iraqi Freedom.  How did our overreaction in Iraq lead to France being attacked so viciously?  I can see how "Operation Iraq We Gone" contributed to the mayhem we are seeing right now, but Operation Iraqi Freedom, not so much.  It seems to me when President Bush left office Iraq was stable, on the right path, and Muslim extremism was being rolled back.  Beating one's enemy on the battle field has a way of sapping them of their vigor.

Then we elected a new President who was going to correct the mistakes of our "Cowboy President."   Operation Iraqi Freedom was ended in favor of Operation Iraq We Gone.  The whole region has been going backward ever since.  Allowing our enemy space and time to regroup is an under-reaction that is only going to get more people killed.

"Overreaction"! (smh)
Posted by Basspastor at 11:56 PM No comments:

Tonight in the Democratic Party Presidential debate, they were all in agreement that the Iraq War was the worst foreign policy mistake in American History.

What happened?  Obama failed to negotiate a Status Of Forces agreement allowing US troops to stay in country to insure the progress would continue in the right direction.  The US troops in country were the one honest broker that would be able to see that the Shia, Sunni, and Kurds all got along.

Obama and Clinton then neglected Iraq and dropped the ball during the Arab Spring allowing Iran to extend it's influence in Iraq leading to the neglect of the Sunni and Kurdish area's of the country, which in time led to the rise of ISIS and a new civil war in Iraq starting in 2013.

If Iraq War is the worst foreign policy mistake in American History, it's because of failure, neglect, and negligence directly attributable to the foreign policy of Obama and the Democratic Party.
Posted by Basspastor at 8:45 PM No comments: